One would think that there are more than enough instances of “bad girl” promotion and instigated “beef” between Black girls and their real or phantom “haters.” Just do a media audit, surely you’ll find an excess of lyrics and images blasting messages that insist on competition, superiority, gossip, and violence amongst girls. From reality TV to music (rap or a tune from your favorite pop divas), to videos and film. Yet, apparently staff at Huffington Post Black Voices  (a curated NEWS platform) felt the need to add their voice to the negativity and pit girls against one another when they posted a very baiting headline on their Facebook page regarding the new film adaptation of the musical, Annie, starring Quvenzhane Wallis.

“How Quvenzhane snatched the role of ‘Annie’ from Willow Smith?”

“How Quvenzhane snatched the role of ‘Annie’ from Willow Smith?”

There’s no telling what prompted “Black Voices” to use such divisive, antagonistic phrasing as a headline. One can only deduce the reasoning is sensationalism, especially when the actual article, published in Playbill and written by Karu F. Daniels, makes no reference to any competition between the two girl stars. In fact, there is a very minute mention of Willow, simply saying she was originally cast as Annie. It also mentions her parents remain producers.

A moment of shining celebration for the history-making, Academy-Award nominee Quvenzhane Wallis was otherwise ceded to the mindless/heartless decision that could have a detrimental impact on the very tone in which our girls consume AND are portrayed in media. The post acquired more than 50 shares and stirred conversation on social media.

I thought it practical that when brought to their attention, an editor or someone on staff there who is sensitive to the influence media has on our girls, their interactions and identity,  would realize how important it is to correct the wording. I even crafted a few recommendations as a  guide: “Quvenzhane Wallis Glows as America’s First Black Annie” “Willow Smith opens lane for fellow girl actors…” “Black Girls rock the big screen; make history…”

We’re still waiting for HuffPost Black Voices  to move in the right direction on this. How long that will be is anyone’s guess as the post has sat for more than 5 days and as of Monday, November 17 remains.

Why make this into a big deal? In a space and time when young girls are bombarded with messages that glorify them into “mean girl” behavior and the internet is saturated with fight videos where girls get a digital audience for taunting and provoking their peers, girls deserve responsible media to share their stories.

At the same time, as we so often have to all but conduct an anthropological dig for intentional language that affirms our girls, I did want to include here what the director says about Quvenzhane in the original Playbill piece:

“The people in the press have been saying, ‘Wow, there’s an African-American Annie, and why [would] you make such a change?’ and my response to that is, ‘This is an 11-year-old girl who has to shoulder the entire movie with her music, with her singing, with her acting. How many times in history do we have an 11-year-old girl who has been nominated for an Oscar? So we were extremely lucky that she was available and that she existed and that we didn’t have to find someone. ‘The Beasts of the Southern Wild’ found her for us, and we were really lucky for that.”

Perhaps those of us who work closely with girls are more connected to the impact media messages have on their development. This is why we encourage media to truly reflect on the way it narrates the reality of our girls and be mindful of how their messages are consumed.

What do you think, should Huffington Black Voices retract the headline? Should we be concerned about this? If so, how do we hold media accountable for influencing positive interactions among girls?

Thankfully, Essence magazine got it right! 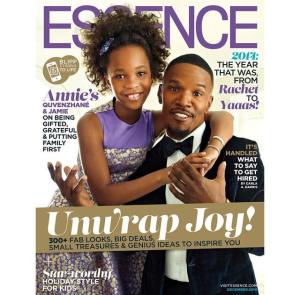