I hate to call this out, though I won’t apologize for it. Sadly this thing that is pressing me is centuries old. It is the thing that causes many good-hearted, well-intentioned, folks to glaze over and ignore the glaring hardship of others. It was the motivating factor behind the infamous, now known to be falsely attributed, Sojourner Truth quote. And though we are more than a century from the first National Women’s Rights Convention and suffrage movement, there’s still yet another generation who could rightfully beg the question…”Ain’t I a girl?”

Here we are in 2015, in the midst of a swelling, impassioned, global movement for girl empowerment. This movement is an appalled examination of the way girls are treated around the globe. It is a clarion call commanding attention to the majestic & transformational force girls can be in their communities if given the required developmental tools, most important amongst those are demonstrative love and genuine concern. The movement is a celebration of the greatness and resilience inherent in being born a girl.

As with most movements, while fueled by thousands, there are always a number of personal narratives held up to advance the cause. There are those whose faces and stories pull at the heartstrings to bring about awareness and connect with stakeholders, and those with the power to bring about the desired change. Oftentimes we find that that power translates into money.

And here is where we find ourselves in a conundrum. This tenuous space where women advocate for Black American girls heartily cheer for girlhood, and enlist their efforts in the fight for the equality and empowerment of all girls; yet the faces and stories of girls they fight for and alongside everyday are seldom, if at all, the ones highlighted or propelled into the public movement discourse. The stories and faces we do get to know seem to make their way to us from far across oceans. We become familiar with those from other continents through very determined and concerted efforts by those coiffed with power and access who are right here stateside along with us.

Somehow those persons of power and access appear oddly unfamiliar with the girls who are standing right on their same continent, in their same country…often in their same cities.  So we become intimately familiar with stories of child marriages in Uganda or sex trafficking in Sri Lanka; not the girls in Chicago and the other 13 American cities listed by the FBI as “high-intensity child prostitution” hubs. We know very well names and faces that connect us in a real way to the lack of access to education in Pakistan; but can’t identify personal stories of girls from the mass school closings in cities like Chicago which impacted mostly Latino and Blacks. The poverty narrative is well pronounced and easily identified with girls in just about any developing country, while muted are those who are living in nine of the worst food deserts. Chicago being chief amongst them cited by the United States Commission on Civil Rights as “not simply a public health issue, but an urgent civil rights issue.”

So there remains the experiences of girls who come of age in the urban strangleholds of violence, poverty and systemic injustices within American cities but for whatever reason are left out of this powerful girl movement. They are disconnected from the conversation. The various reasons why that is are burdensome. Some quite suspicious.

We have to ask, is this movement inclusive of Black girls who hail from systematically impoverished American neighborhoods.? And if so, what is their role?  Is it simply to observe and fight for others, or do they get to tell their stories and have others fight for them, too? Perhaps they are to be treated (as we’ve seen) as mere footnotes and asides. 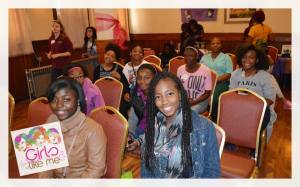 I personally sought to include their experiences producing the annual Chicago Day of the Girl in observance of International Day of the Girl as designated as October 11 by the United Nations. Since its first declared celebration in 2012, we have connected more than 500 Chicago-area girls to this movement, ensuring activism and global sisterhood was our focus. The goal is to show girls that they are not alone in facing issues that debilitate their quality of life. That they can stand in solidarity with their sisters beyond their blocks and neighborhood, beyond their cities and their own country. This very grassroots effort, and others like it, need to be supported and embraced by all who claim to advocate for “all girls.” We need to provide a pathway for power brokers to look their way. To look and see the girls who have been left out and marginalized, whno are not traditionally associated with the illustrious, well-funded, institutionalized girl organizations.  Fund programs birthed in their communities by women who have found their way out and now selflessly serve on behalf of girls. See their need as a state of emergency and aid in the resolution of their issues.

And the list of needs/issues is long. We can choose from any of the those listed below to begin. Then we can consider the impact of incest/molestation which take on different levels of generational trauma in certain communities.

Finally after that, ask ourselves, is this important to me? How will I help.

The reality is, girls are living in the margins of our society in plain sight of privilege, access, prosperity, and quality living. They can see it, hear it, and smell it. Yet there remains a glass wall blocking them from touching it.

Let’s all break the glass!